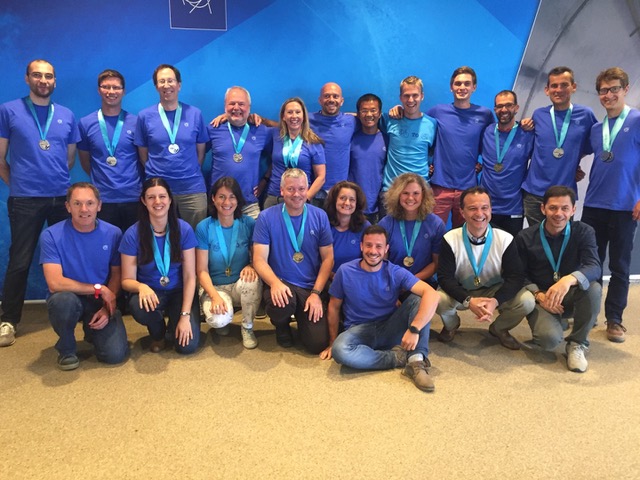 Every three years, athletes from 42 different European research institutes spanning 16 countries are brought together to compete in numerous sporting events, hosted and organised by one of the participating institutes. In June, a team of 55 CERN athletes and their supporters travelled to Varese, Italy, to take part in the 16th Atomiade, organised by JRC-Ispra. The Atomiade event comes under the umbrella of the numerous events organised by ASCERI (the Association of the Sports Communities of the European Research Institutes), which aims to contribute to a united Europe through regular sports meetings, bringing together members of public research institutes at a European level.

Over the course of the Saturday and the Sunday, the CERN team participated in athletics (11 medals, including six bronze, four silver and one gold), cycling (sixth place), football (losing in the semi-finals to the winning team), golf (coming thirteenth overall and sixth in the doubles event, out of over 100 competitors), mountain biking, table tennis (sixth place), tennis (first and fourth place), trail running and volleyball (second and fourth place). Although the event is first and foremost a sports competition, it also has many other facets and benefits.

Not only does it improve working relationships between members of the CERN team, which includes representatives of most sectors, ages and professions within the Organization, enabling the athletes to meet other CERN people from outside their habitual sphere of work, but it also fosters a sense of pride in representing CERN. It builds strong team spirit, giving an incentive to train and the motivation not to let down the other members of the team. Team sport also plays a crucial role in reducing stress levels. Furthermore, the links and connections made with our European counterparts are invaluable and, in some cases, we realised that not only were we meeting on the sports field, but some members of the opposing teams also collaborate with CERN.

All of the CERN athletes would like to thank both the Staff Association and the CERN Management for their unfailing support of the sportsmen and sportswomen who compete in the Atomiade events, and to extend an invitation to anyone who might like to participate in the next edition to contact cern.clubs@cern.ch. More details, photos and videos of the event can be found in the Staff Association’s Echo.

Victory for CERN runners at the Geneva marath...