On 17 July 2016, Romania became the twenty-second Member State of CERN 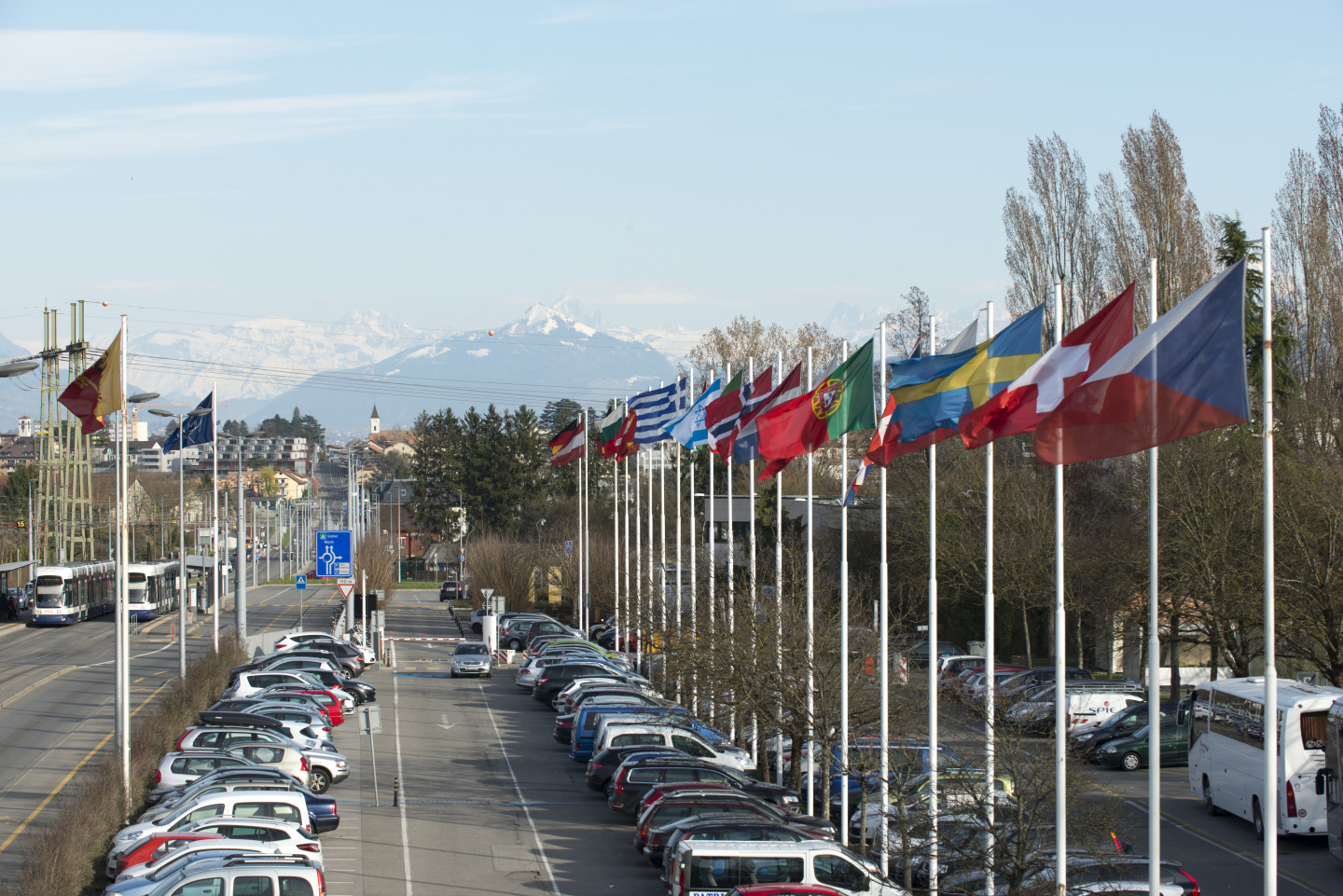 The flags of the CERN Member states in front of the Organization main site. A flag raising ceremony will soon take place to mark the accession of Romania as the twenty-second CERN Member State. (Image: Maximilien Brice/CERN)

On 17 July 2016, Romania became the twenty-second Member State of CERN, having acceded to the Organization's founding Convention, deposited with UNESCO. The notification by UNESCO of Romania’s accession to the Convention brings to a conclusion the formal application process that started in 2008, crowning a period of cooperation stretching back 25 years.

"This is a very special moment for Romania and its relationship with CERN,” said Ambassador Adrian Vierita, Romania’s Permanent Representative to the UN in Geneva. “We are proud of the work of the many Romanian scientists and engineers who in recent years have cooperated with CERN and greatly contributed to this outcome. We are looking forward to deepening and diversifying this cooperation as a full-fledged member of CERN, for the benefit of science and humankind.”

"The accession of Romania to full CERN membership underlines the importance of European research collaboration in the quest to understand nature at its most fundamental level,” said Professor Sijbrand de Jong, President of the CERN Council. “United we can do so much more than as individual countries."

“I am extremely pleased to welcome Romania as a new Member State of CERN,” said Fabiola Gianotti, CERN Director-General. “These are exciting times for CERN and particle physics, and I am very glad that the Romanian scientific community, in particular the younger generations, will now have increased opportunities to contribute to our truly international research programme. We have a long history of working with Romania and I am delighted to witness this relationship being reinforced today.

Bilateral contacts began back in 1991, when a scientific and technical cooperation agreement was signed between CERN and the Government of Romania, establishing the legal framework for later developments.

Aspiring to become a full-fledged Member State and thus to contribute fully also to the governance of the Laboratory, Romania submitted its formal application to join the Organization in April 2008. The Agreement granting Romania the status of Candidate for Accession came into force on 12 November 2010.

Romania's scientific community at CERN has grown over the years and currently numbers around a hundred visiting scientists. Romania has particularly strong presence in the LHC experiments ATLAS, ALICE and LHCb. Romanian researchers and engineers also work at DIRAC and n_TOF at the Proton Synchrotron (PS), on the NA62 experiment at the Super Proton Synchrotron (SPS), and at the ISOLDE facility. Romania is also active in the Worldwide LHC Computing Grid and takes full advantage of technology transfer opportunities offered by CERN, notably through membership of the HEPTech network.

The admission of Romania as a Member State brings an end to the status of Candidate for Accession, which was created by the CERN Council in 2001. This status was intended to allow countries wishing to become full Member States of the Organization a period of progressive scientific and financial integration. CERN now offers two statuses as part of its plans to encourage scientific and geographical enlargement. The statuses Associate Member State and Associate Member State in the pre-stage to Membership (for those countries who wish to become full Member States in the long term) were created in June 2010 and are also open to non-European countries.