Innovation for Change project, which began at CERN, rewards students that put existing technologies to better use for global, societal needs 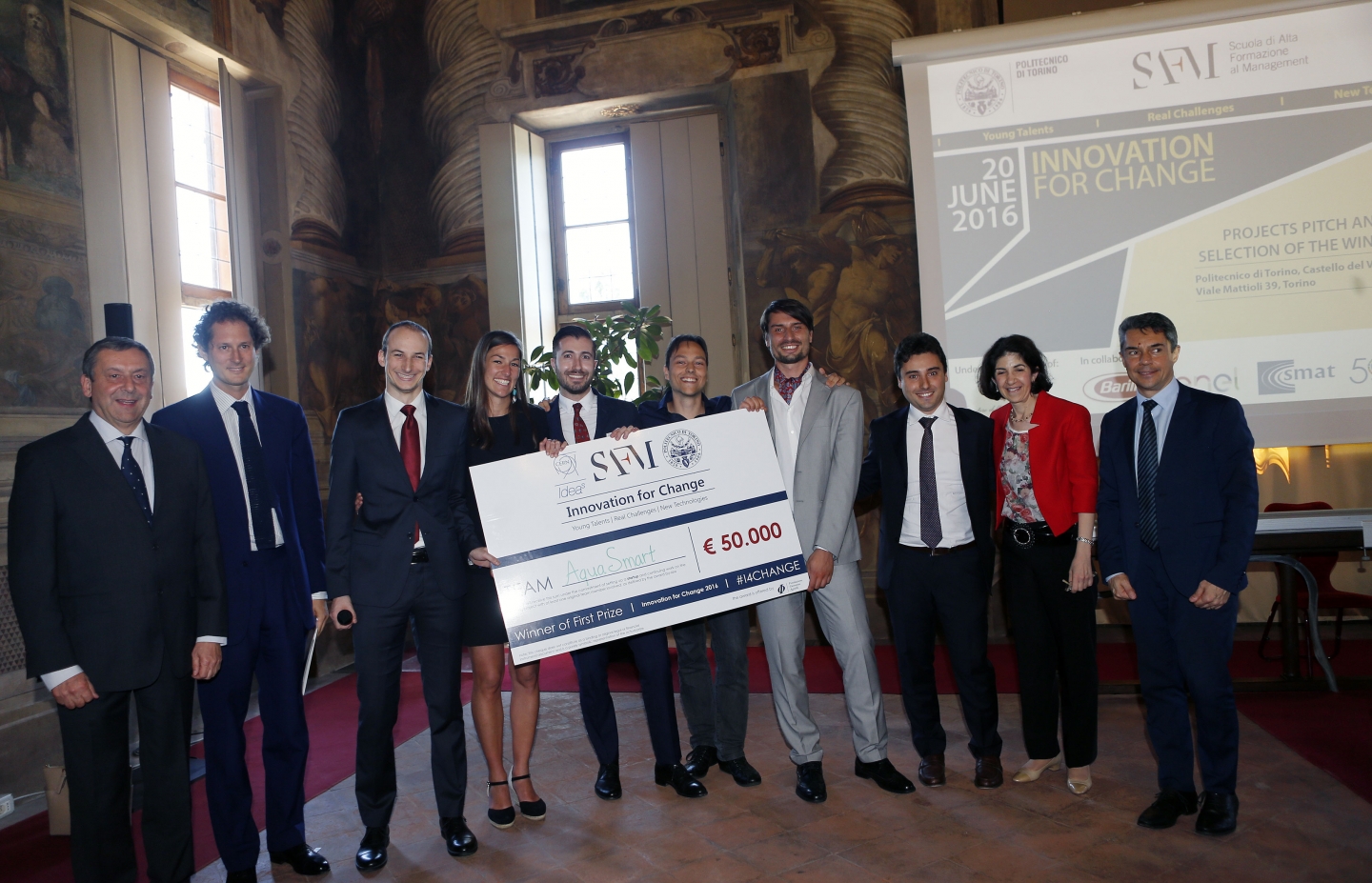 Yesterday AquaSmart, a smart grid system to help identify and solve water leakages, was announced as the winner of the Innovation for Change project. Innovation for Change, which began at CERN in February, rewarded the business ideas developed by 50 MBA students of the Scuola di Alta Formazione al Management (SAFM, a business education programme based in Turin) and graduate students of the Polytechnic of Turin.

The ideas had to be based on credible innovative solutions, using available technologies to address global collective needs so that real startups could be borne into the market.

The prototypes and technical solutions were presented and evaluated on 20 June at the Castello delValentino in Turin by four special judges: Vice President of the Agnelli Foundation, John Elkann; the Director General of CERN, Fabiola Gianotti; the Rector of the Polytechnic of Turin, Marco Gilli and the President of SAFM Francesco Profumo.

Other ideas included: automatic sensors that release the right amount of fertilizer in agricultural fields, reducing the impact on aquifers; even a floating greenhouse shaped like a whale that uses solar energy to desalinate sea water and irrigate crops, bringing water to where it is scarce; and solutions for urban construction using algae to purify water, reducing fuel consumption.

After working through the solutions developed by the students, the judges awarded AquaSmart the best business idea. They will receive a special contribution of 50,000 euros, allocated by the Agnelli Foundation as part of the celebrations marking 50 years of operation. The contribution is intended to support the Working Group of AquaSmart to constitute a real startup and start operating on the market.

Besides AquaSmart, the judges also selected Demetra, an automatized agricultural resource management system and Alfie, a vertical algae wall concept for water recycling in urban cities.
The three working groups will be awarded the opportunity to participate for free at the European Innovation Academy (EIA), the international acceleration programme for technology startups, that will be hosted by the Polytechnic of Turin from 10 to 29 July in cooperation with partner companies and will bring to Turin mentors from Silicon Valley and 300 talented students from the best universities around the world.

The programme is a collaboration between CERN, the Italian Ministry of Economic Development, the United Nations Development Programme, Barilla, ENEL, Smat and other Italian and international organisations.

International Day of Women and Girls in Scien...

CMS completes the release of its entire Run 1...

LHCb releases first set of data to the public

CERN, CHUV and THERYQ join forces for a world...