The LHC has been accelerating more and more protons, and to allow the machine to reach its maximum intensity, it will undergo a thorough scrubbing. 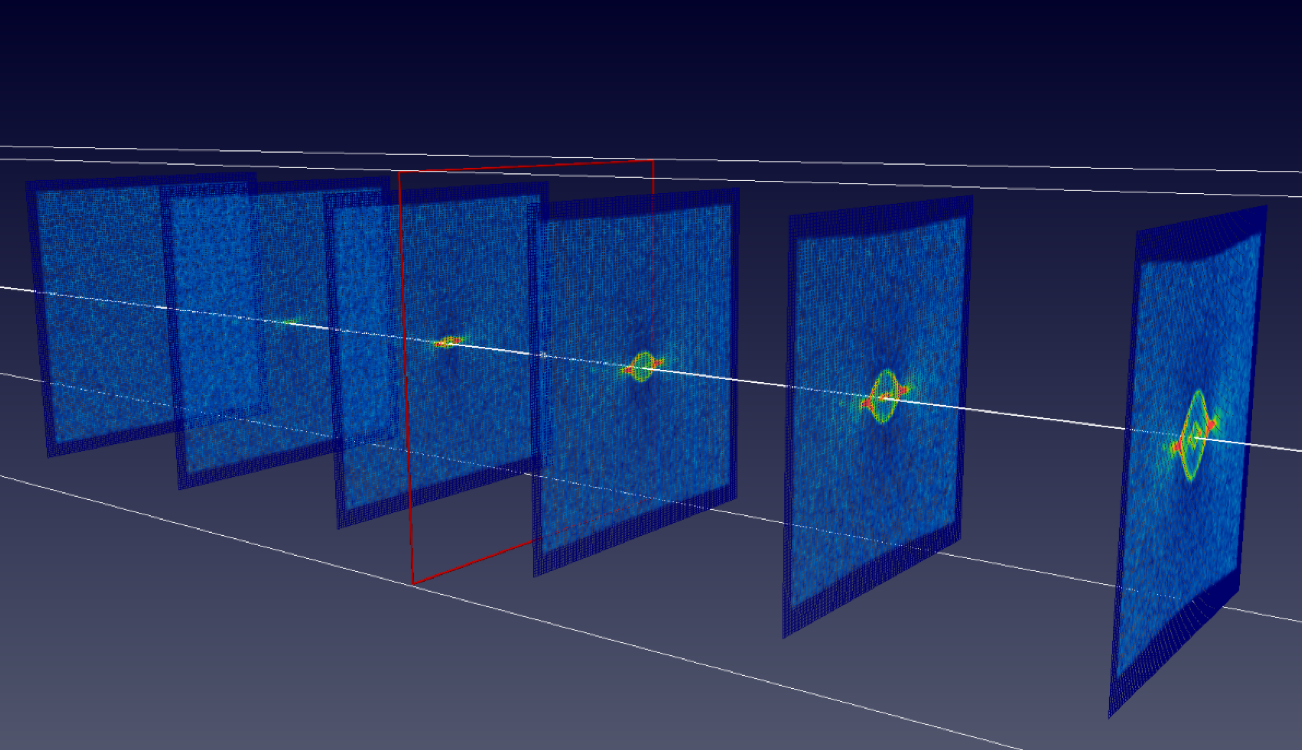 This image shows a simulation of the electron clouds development when the proton beam passes through the vacuum chamber. (Image: CERN)

Protons are jostling for space in the Large Hadron Collider. Since the start of the physics run on 23 May, the operators of the huge accelerator have been increasing the intensity of the beams, injecting more and more protons in order to increase the number of collisions.

“Trains” of proton bunches have been circulating in the machine for the past week. Consisting of up to 288 bunches, each containing more than 100 billion protons, the trains are formed by the accelerator chain and then sent into the large ring. They are then accelerated to a speed close to that of light for around twenty minutes, before they collide with each other in the centre of each experiment. Recently, 600 bunches have been circulating in each direction. The aim is to reach 2500 bunches in each beam within a few weeks.

To achieve this, the machine specialists must first improve the surface conditions of the vacuum chambers in which the protons circulate. Obtaining the best possible vacuum is an essential prerequisite to make an accelerator work. Molecules remaining in the vacuum chamber are obstacles to the circulation of the protons – it is like sending Formula 1 cars around a track full of parked cars. Hence, before starting up the accelerator, the vacuum specialists pump the air out of the beam pipes, obtaining a high-quality vacuum, almost as good as on the surface of the moon (10-10 or even 10-11 millibar). This is enough to allow the circulation of a few hundred proton bunches, but beyond that, things get harder.

Despite the ultra-high vacuum, residual gas molecules and electrons remain trapped on the walls of the vacuum chambers. When the beam circulates, these electrons are liberated from the surface of the walls due to the impact of lost particles or photons emitted by the LHC proton beams. They are accelerated by the beam’s electrical field and hit the walls on the opposite side of the chamber, detaching trapped molecules and freeing more electrons. If the number of liberated electrons is larger than the number of impacting electrons, it may initiate an avalanche of electrons, which will destabilise the beam. This phenomenon, known as the “electron cloud”, is amplified by the large number of proton bunches and the short distance between the bunches in the beam.

To mitigate the impact of these clouds, the vacuum chamber can be conditioned with the beam itself. Increasing the number of circulating bunches frees as many molecules of gas as can be sustained and causes a massive release of electron clouds. Experience has shown that, once this operation, called "scrubbing", has been carried out, the production rate of gas molecules and electrons progressively falls. This allows the beam intensity to be increased stepwise until the LHC can be filled completely.

So it’s time for spring cleaning at the LHC. For several days, starting today, the LHC operators will carry out scrubbing of the vacuum chambers with beam. The physics run will take a short break, starting again in much better conditions mid-June.

Cool kickers for the HL-LHC

Cool kickers for the HL-LHC

Autopsy of an LHC beam dump

What will the future LHC beam dumps be made o...